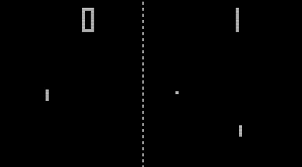 If you are feeling the nostalgia for retro game playing it doesn’t get any more iconic than Pong.  Pong was first introduced to early gamers on November 29, 1972.  In celebration of the momentous occasion Atari has declared today as “Pong Day” in celebration of its 45’th birthday.  Pong was the first commercially successful video game and single handedly established the video game industry.   Engineer Allan Alcorn was assigned by Atari funder Nolan Bushnell to create a simple training exercise.  Alcorn went above and beyond adding features like accelerating speeds as the game played and segmented paddles that changed the angle of the ball.  Alcorn also kept a glitch that stopped the paddle from going the whole way to the top of the screen increasing the games difficulty.

Game On!  If you feel the need to try out your Pong skills, go for it with the Atari Pong Classic.